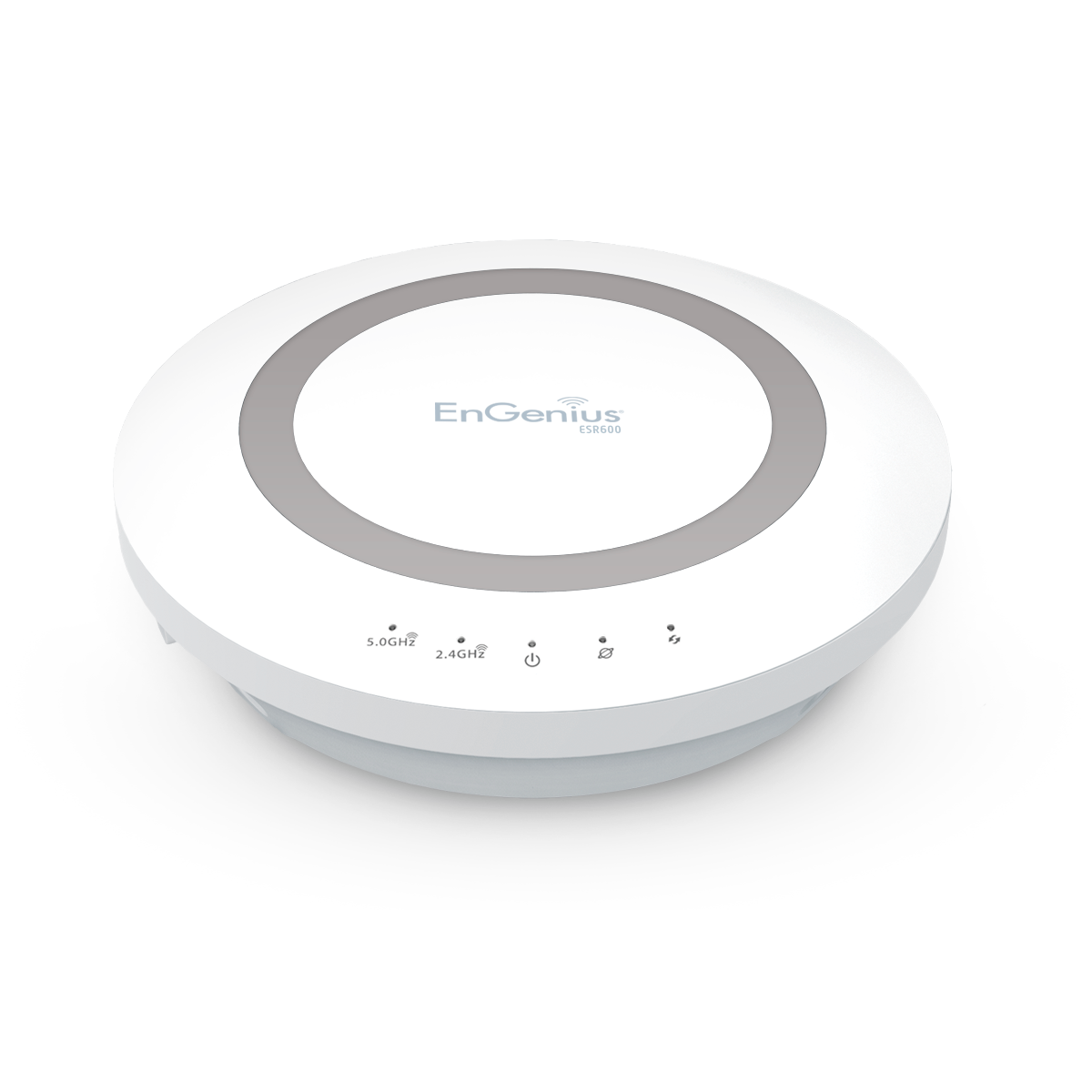 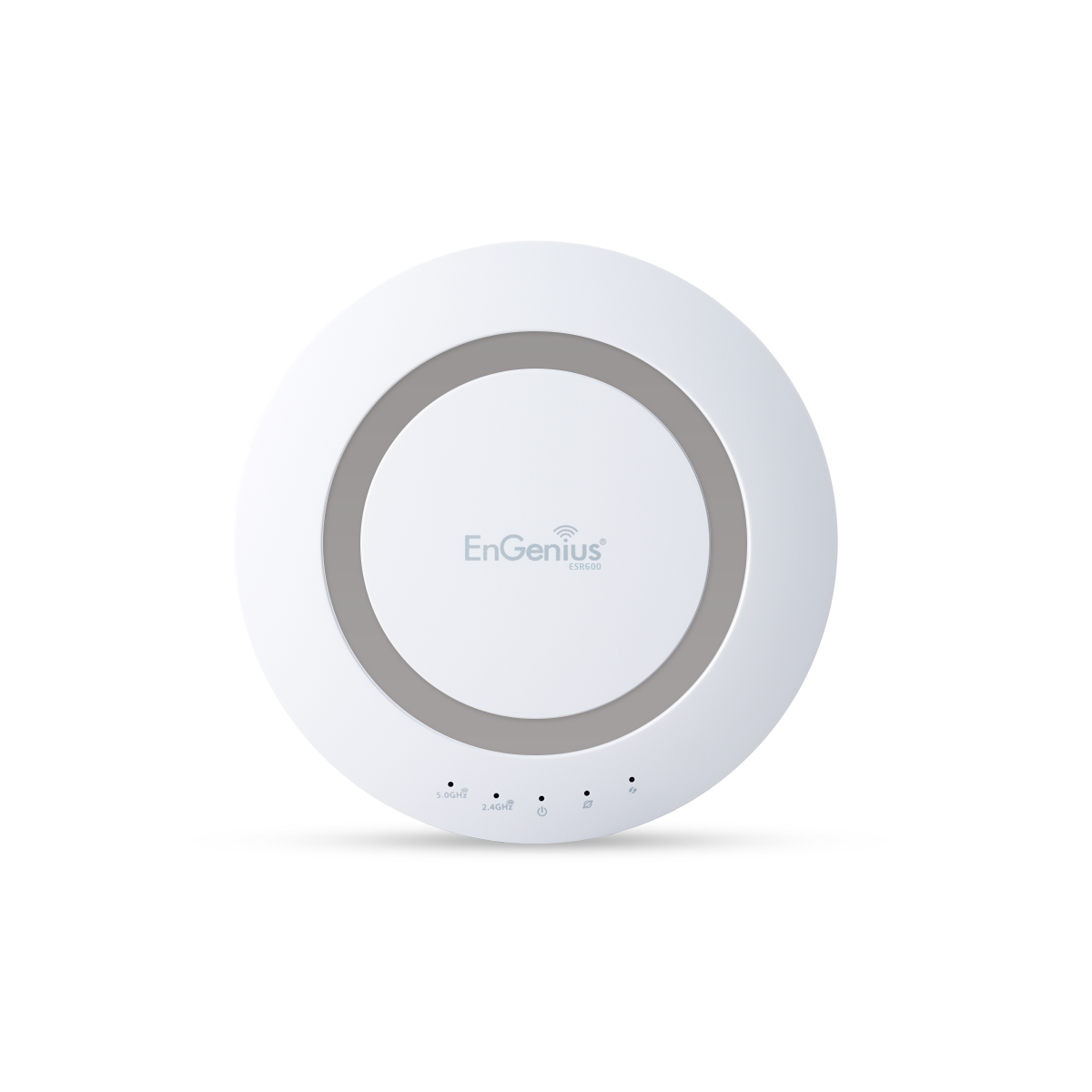 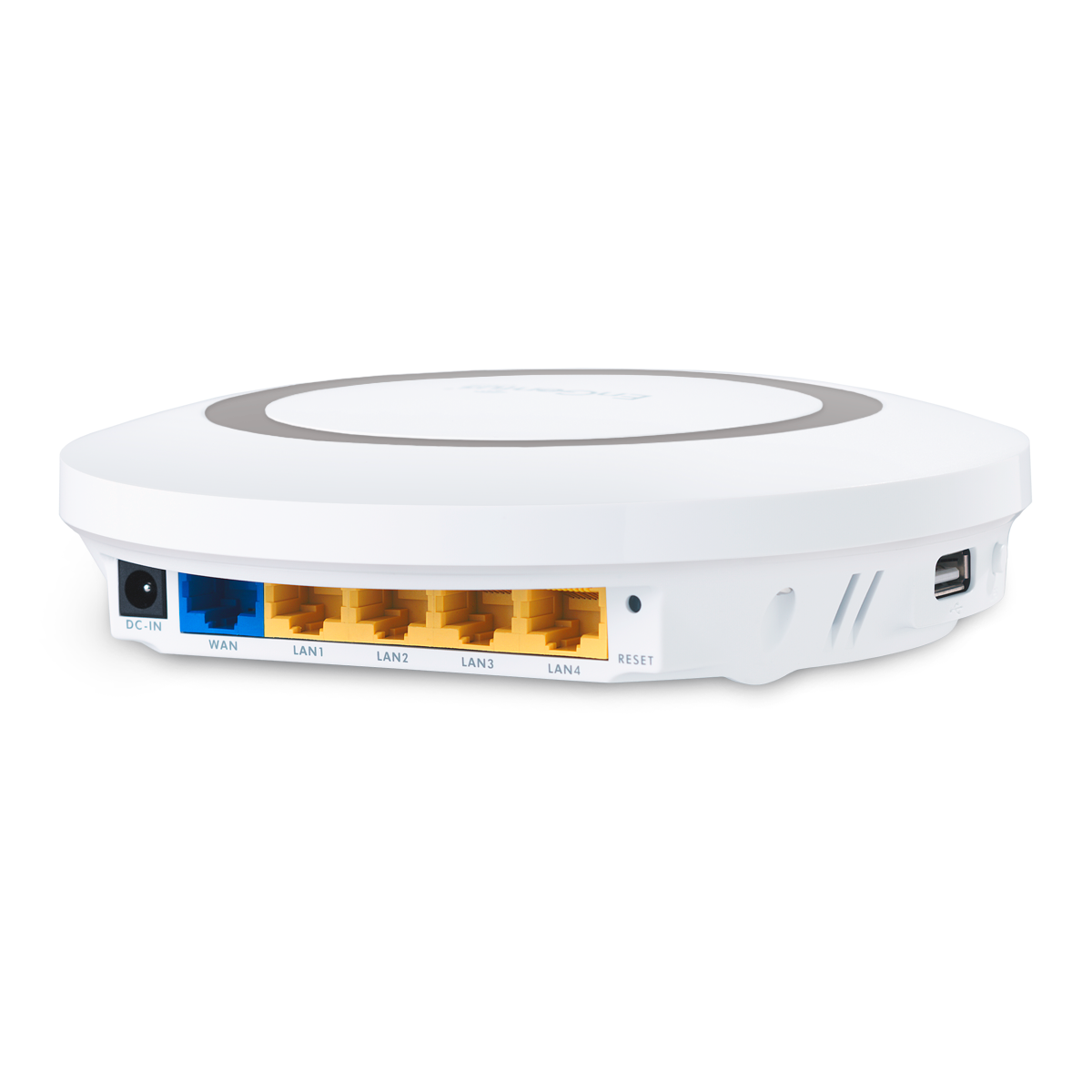 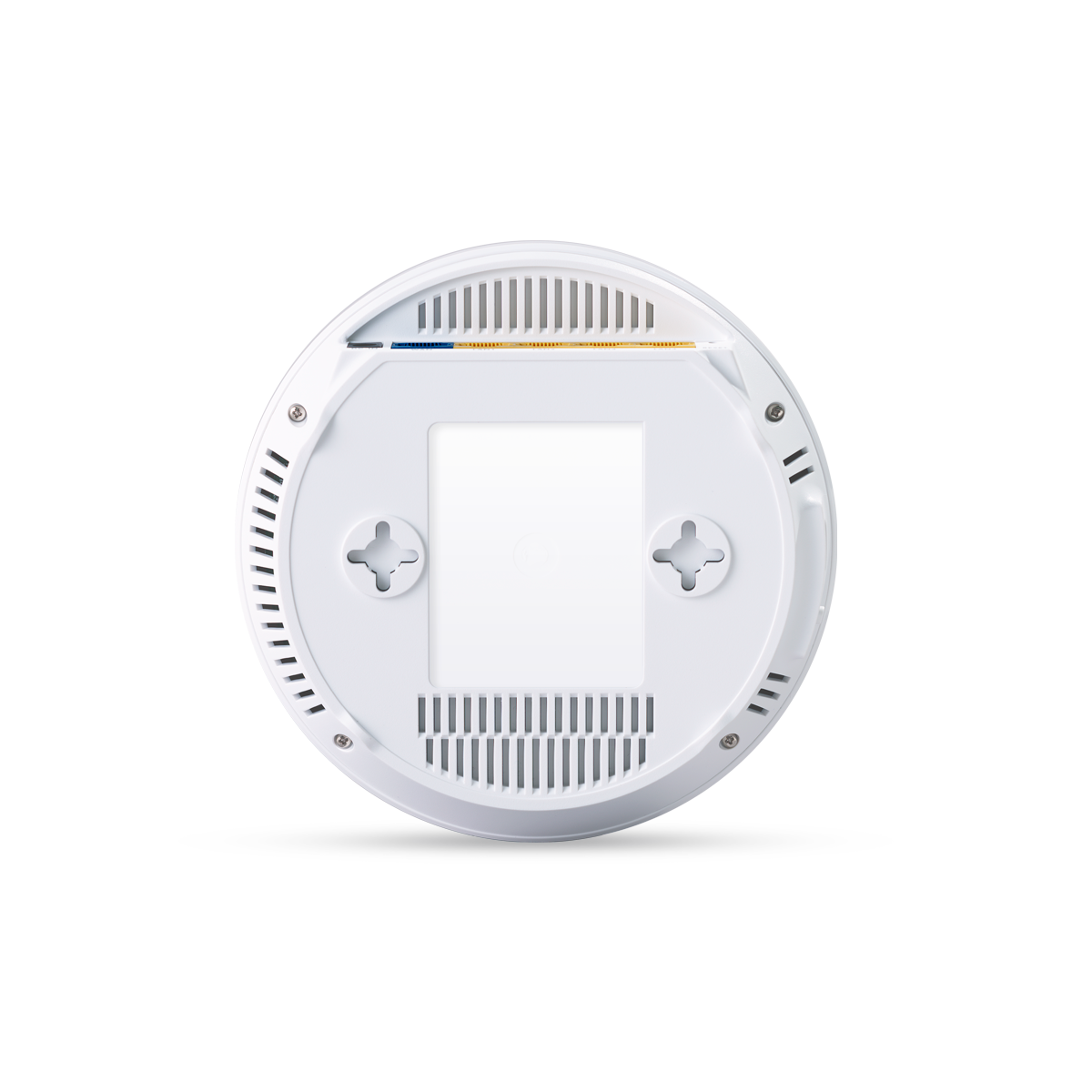 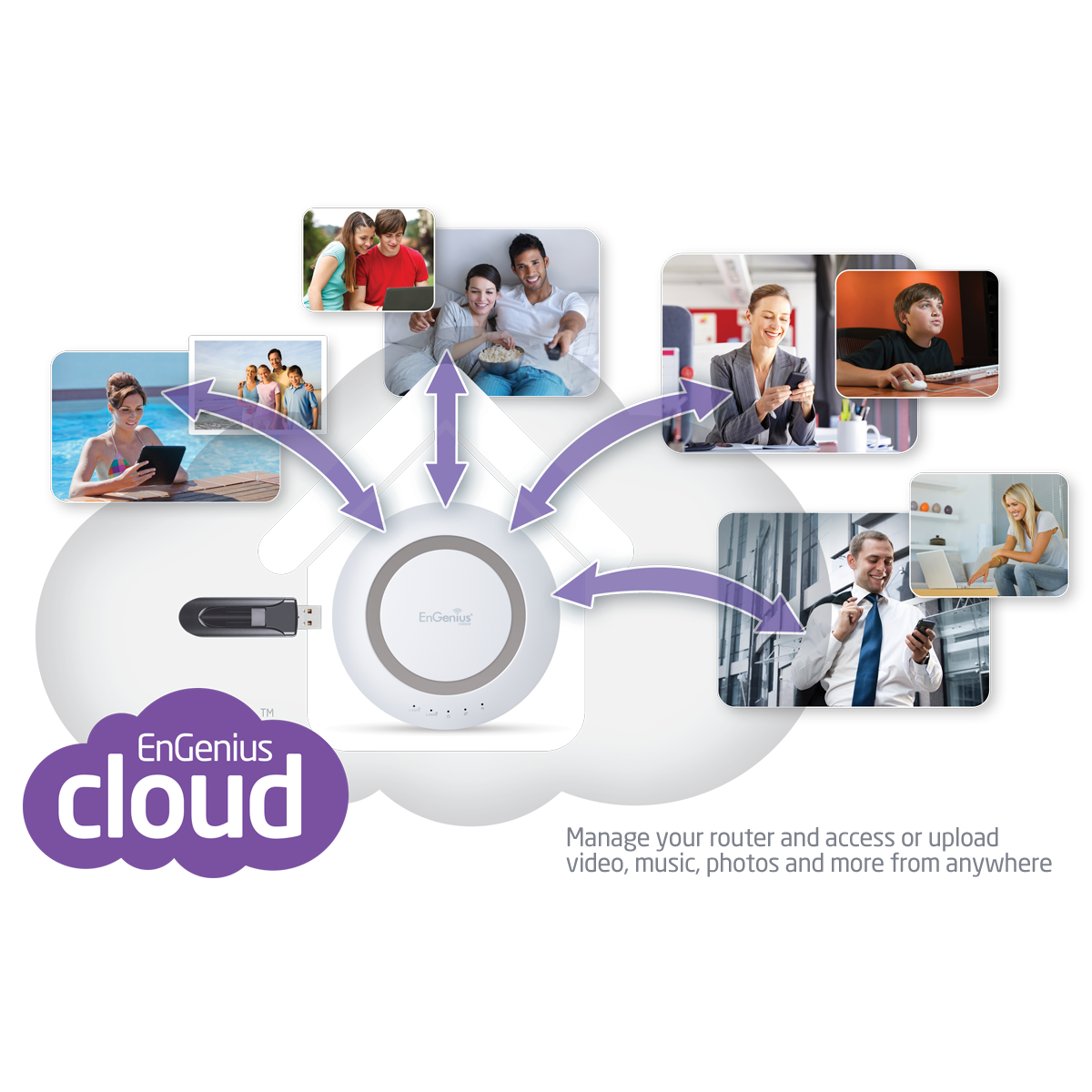 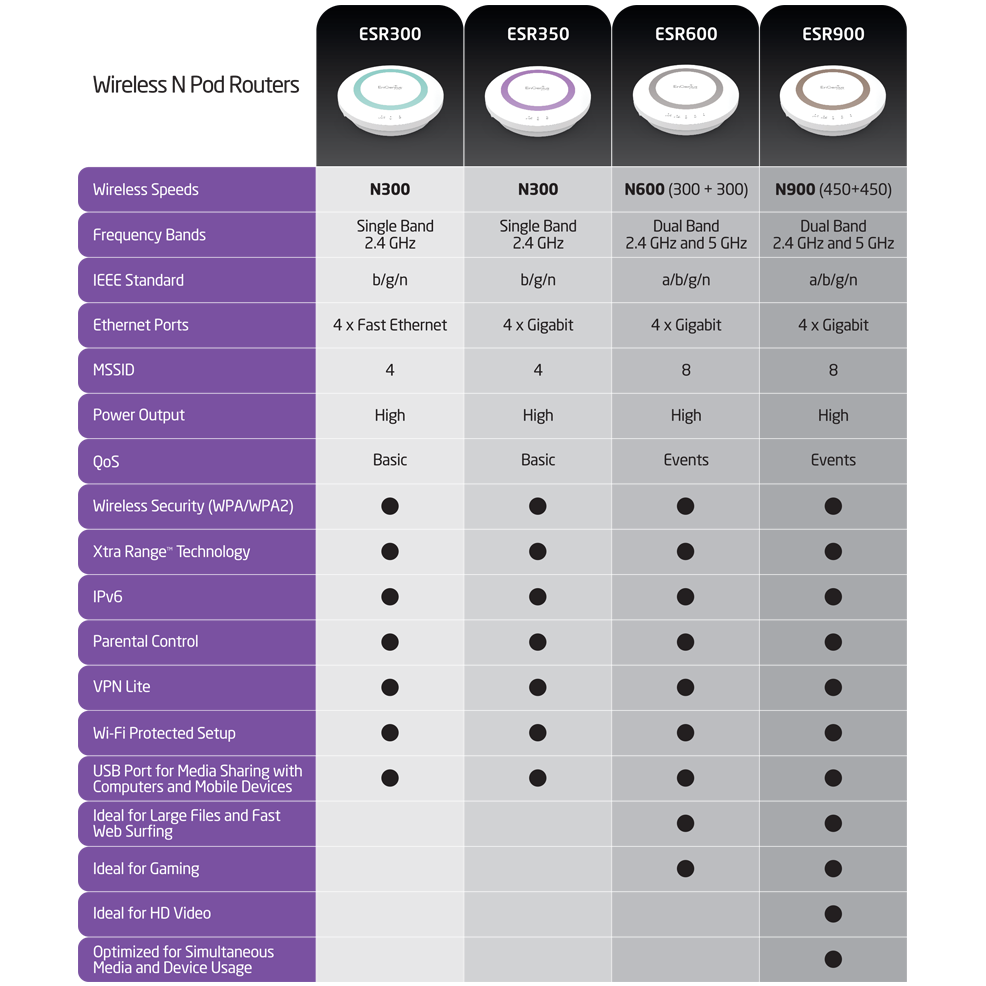 The EnGenius ESR600 is a Dual Band (300 + 300 Mbps) Wireless N600 Router with a Gigabit WAN port for faster upload and download speeds and a built-in 4-Port Gigabit switch for connecting home entertainment devices like HDTVs, Blu-ray players, set top boxes or game consoles so they can access your Internet connection. This high-powered Xtra Range™ pod-shaped router also includes a USB port for attaching a storage device and sharing media content in the home or away from home to mobile devices like smartphones or tablet and laptop PCs with EnShare™ — Your Personal Media Cloud.

Includes DNLA Server so you can share media and picture files from local USB storage to your network. Just connect USB storage (stick/external hard drive) with your media files to the USB port on the router and you can then share them to UPnP compliant renderers such as Windows computers, tablets, phones, medial players.

Xtra Range™ — The ESR600’s high transmit power capability is designed to deliver extended range and expanded coverage so your family can connect more devices throughout your home. The ESR600 also supports several security features and settings including industry standard wireless encryption, such as WPA/WPA2 (Wireless Protected Access) to prevent unauthorized access to the home network; an advanced SPI (Stateful Packet Inspection) firewall to block malicious software from the Internet from accessing networked devices; MAC Address filtering to grant only known computers and devices network access; and URL filtering to block access to unwanted or offensive websites.

With the ESR600 you can also enable up to eight separate and discrete SSIDs, Service Set Identifiers (four per frequency band) or ways to access the network. This gives families the ability to offer friends or visitors Internet access or access to specific devices, like networked printers, while protecting other networked computers or hard drives in the home that may contain private information.

Don't be confused by the flying saucer shape of the ESR600 from EnGenius, it is actually intended as desktop device or to be wall mounted. The lan and power connections are on the side which makes them less than ideal for ceiling mount - could be done but the cables would stick out of the side and may look messy.