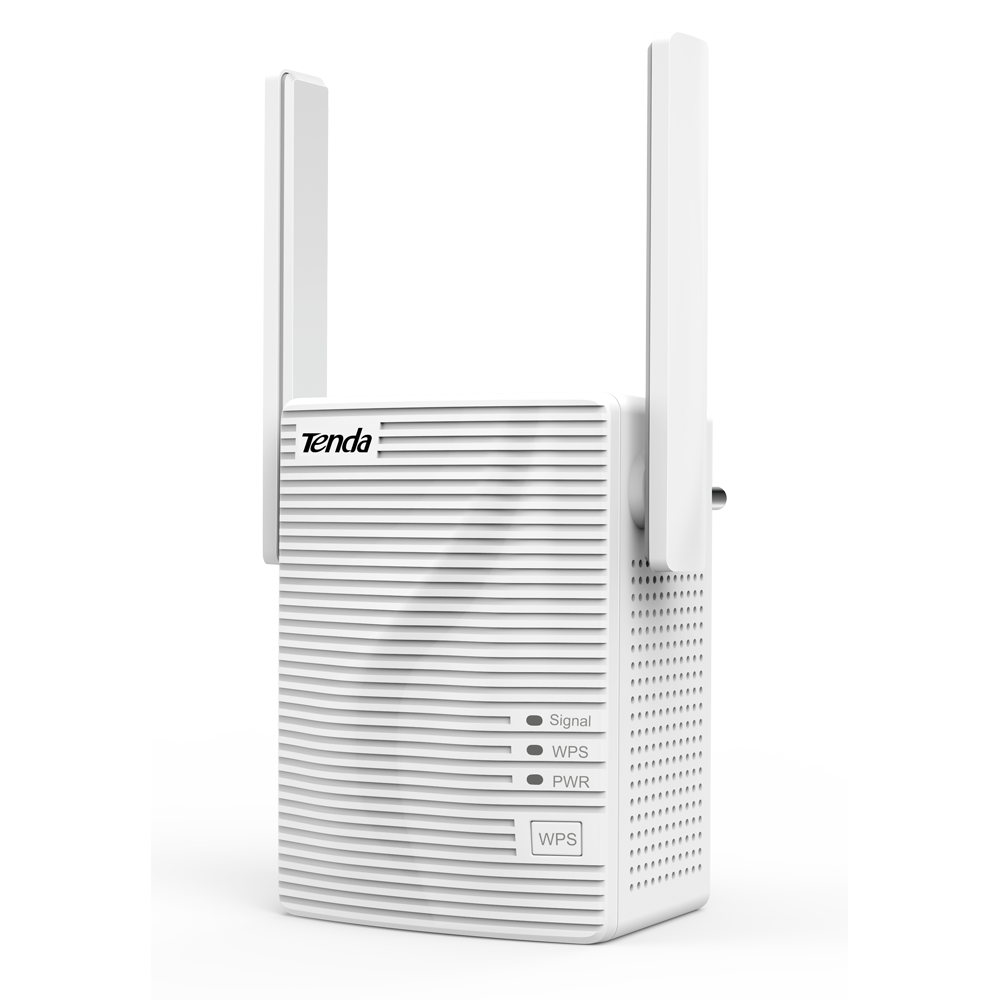 A Wireless Repeater is a piece of equipment that takes an existing wireless signal and repeats the signal from the wireless repeater. The cost of having a WiFi repeater is that the signal is halved each time it is ‘repeated’. This means that if you have 100mbps throughput at the point of origin, you will have 50mbps at the first repeat, 25mbps at the second and so on.
Wireless repeaters are best used in open areas where there is less interference from objects as wireless signals, in general, are not great at penetrating through objects or walls.
For providing temporary wireless coverage around your home or to cover a blackspot a wireless repeater is a good solution, however, if you need higher throughput than the repeater will offer you may wish to consider a HomePlug solution. 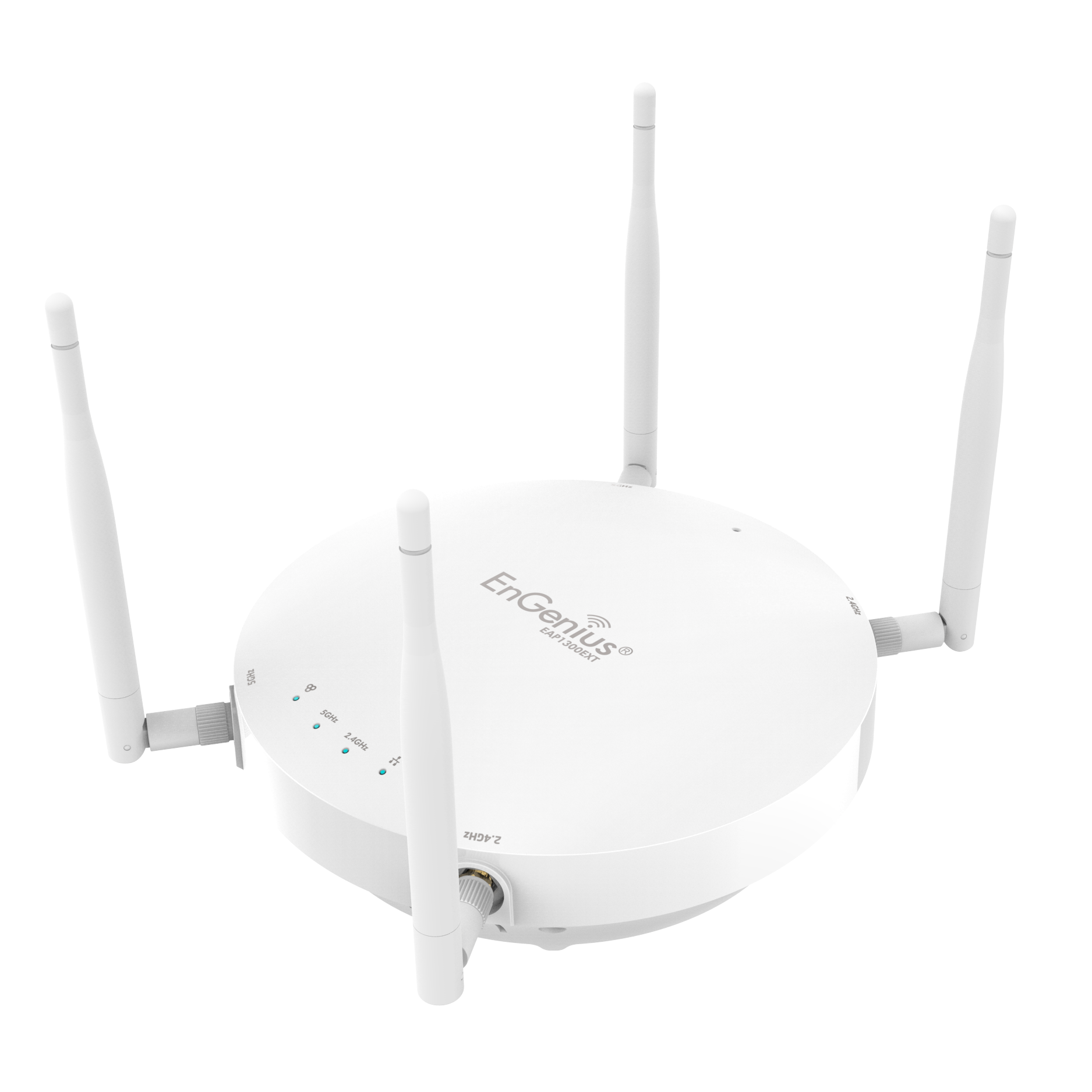 An Access Point broadcasts a wireless signal for devices such as laptops or smartphones to connect to in order to receive network or Internet access. Access Points broadcast on two frequencies; 2.4Ghz and 5Ghz.
2.4Ghz wireless signals tend to be better at penetrating through objects, at least in comparison to 5Ghz, but as a result offers lower overall link speeds, for example, 400mbps, whereas 5Ghz offers higher link speeds, for example, 867mbps, but as a result does not penetrate through objects as well. It is worth noting 5Ghz takes twice as much power to cover the same distance as 2.4Ghz which means wireless devices will drain their batteries faster when connected to a 5Ghz wireless network.
When your wireless device connects to a wireless access point it uses a specific wireless channel dictated by the access point, usually, the one chosen has the least amount of interference from other wireless devices in the local vicinity. Historically this was not a problem because the channels provided by the 2.4Ghz frequency were sufficient, but with the rapid increase of wireless devices using 2.4Ghz, the channels are starting to become crowded and as a result, can cause poor network performance.
5Ghz, in comparison, offers more available channels to 2.4Ghz so this should prevent any problems of congestion in the future. In reality, you would have to have several hundred clients using a single 2.4Ghz channel to see any true performance drop from congestion; something that could happen in a football stadium if all the fans are connected to the WiFi!
A common misconception is that people often ask for a wireless router when they actually require an access point to provide wireless signals for client devices to connect it, an access point does not do any routing or assigning of IP addresses which are the job or a router. To add to the confusion, a wireless router is also an access point, but an access point is not a router, in 99% of cases if you want to add WiFi to a location you need an access point and not a wireless router.
A wireless access point is best used for providing a WiFi signal in blackspots or extending the existing wireless coverage in a location.

A Wireless Bridge is a pair of outdoor units used to link two locations using a WiFi signal. Imagine an invisible network cable running through the air from one point to another. Usually, the wireless frequency used is 5Ghz, although historically 2.4Ghz has also been used for shorter distances and lower data rates.
There are two main considerations when creating a wireless bridge; the first is that you must have line of sight for a Wireless Bridge to work, this means no objects should be in between the two locations. The second consideration is the environment as wireless signals can be affected by moisture in the air and other wireless signals that may cause interference. A humid environment will negatively affect the performance of the link, and having too many Wi-Fi devices or non-Wi-Fi devices such as Radar using the same wireless channel can also degrade performance.
It should be noted that there is also an EU regulation that states that if an outdoor Wireless Bridging unit is using the same wireless channel as a non-Wi-Fi device/service such as Radar, then it should change channel immediately. This does cause a problem when a wireless link is using the WDS Bridge operating mode, as that action will drop the connection. Our recommendation for bridging would be operating modes WDS AP and WDS Station, this will allow the WDS Access Point unit to dictate what wireless channel is used and if it has to change channel due to interference it will tell the other end and thus not drop the connection.
What is the maximum distance that a wireless bridge can go? In reality a bridging unit could direct a signal towards the moon, and assuming that there is no interference along the way, it would reach it! However, you have to consider that wireless links are a two-way process, which means that you need an equal amount of power on both the transmitting and receiving end for successful connection between two units. This means if you have a wireless signal at the bottom of your garden, a mobile phone will, in most cases, have a weaker connection to that signal in comparison to a laptop, assuming of course that the laptop has a more powerful antenna built-in.
A wireless bridge is an ideal solution for joining two or more locations when running traditional cable is not an option and, assuming you have line of sight, the connection should remain stable. 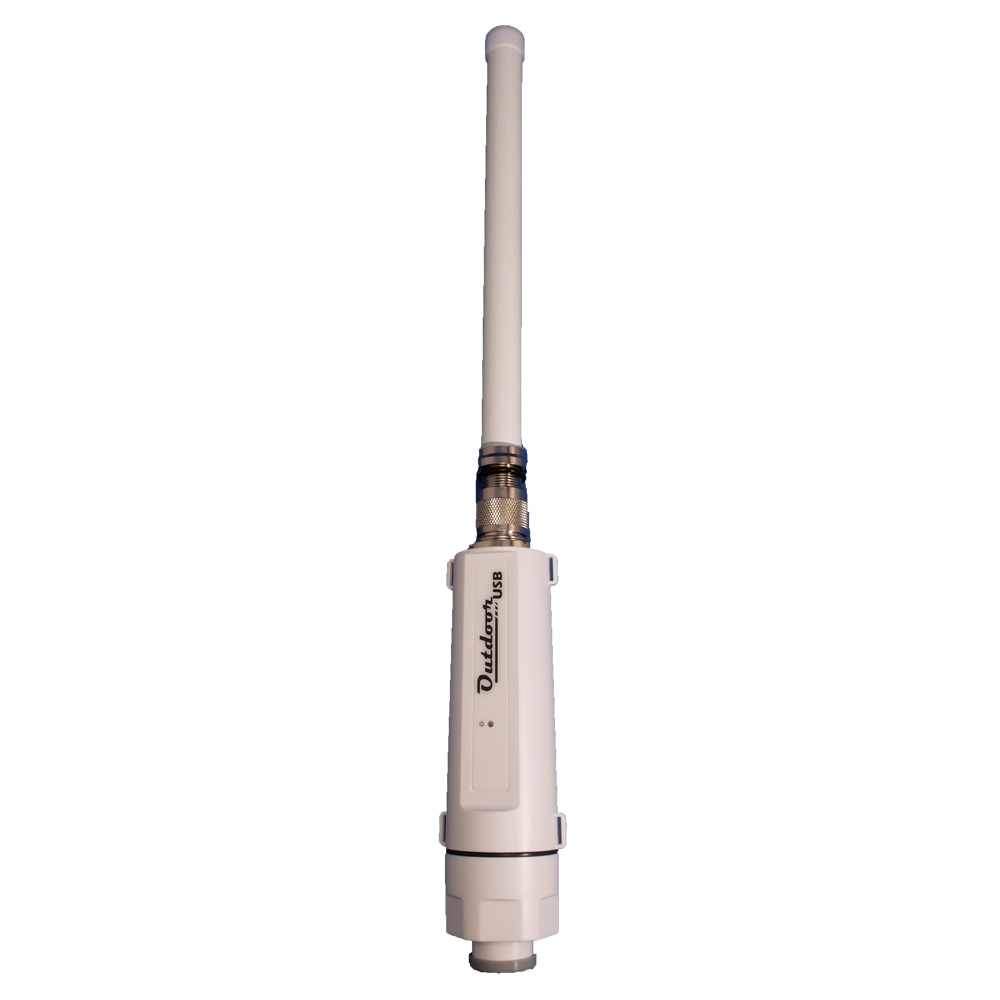 The Patriot Outdoor Antennas bridge a connection from an existing wireless signal and send that signal to a wireless router in order that your client devices can connect and share a single internet connection.
Whilst you might see this as a WiFi booster in actual fact it is not boosting but bridging a connection to an existing connection and then re-broadcasting a new wireless signal.
The Patriot is ideal for use on campsites where Wi-Fi is offered but the signal is often too weak or too far away for mobile phones to connect to. The Patriot allows you to ‘catch that signal and bring it inside’ so that mobile phones can locally connect to the original Wi-Fi signal.
There are several variants of the Patriot with support for 4G, dual-band Wi-Fi and Ethernet connections, but the principle remains the same, you are bridging a connection to an existing Wi-Fi connection and making it accessible to multiple devices.
The Patriot is a great solution if you are just outside of the range for picking up Wi-Fi offered at a location and you want to share that signal with other devices.
Solwise Patriot USB (2.4GHz WiFi)
Solwise Patriot 2H (Ethernet)
Solwise Patriot 4G
Solwise Patriot DB (Dual-Band) 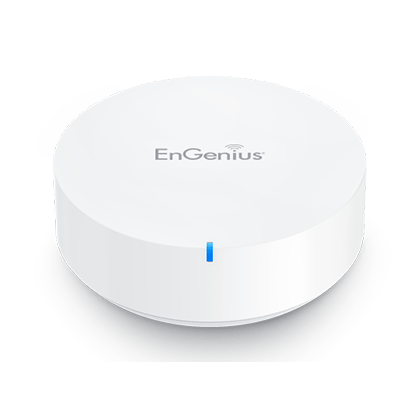 A wireless mesh unit or node works in a similar manner to a wireless access point in that it provides a wireless network for client devices such as mobile phones and laptops to connect to, however, unlike access points, mesh units are designed to work in groups.
You have one primary node that is connected directly with a wired Ethernet connection to the existing network which in turn communicates to the other nodes wirelessly whilst at the same time increasing the wireless coverage.
Mesh networks do have the advantage of only broadcasting one SSID, irrespective of how many nodes are in use, which makes it simple for you to connect your client devices such as laptops and smartphones.
Mesh networks are self-healing which means if there is a break in the network coverage then the network will automatically re-adjust to fix the coverage problem. Since mesh networks communicate exclusively using wireless signals, anything that affects wireless transmission will affect the mesh network, and you may experience poor performance. If you have a building with thick walls, for instance, then you may have to purchase more nodes to get around the problem or look at another solution.
Mesh units are a great solution if you have a wide-open area or limited wall coverage. The ease of setup means that anyone can have a wireless network up and running within a couple of minutes. 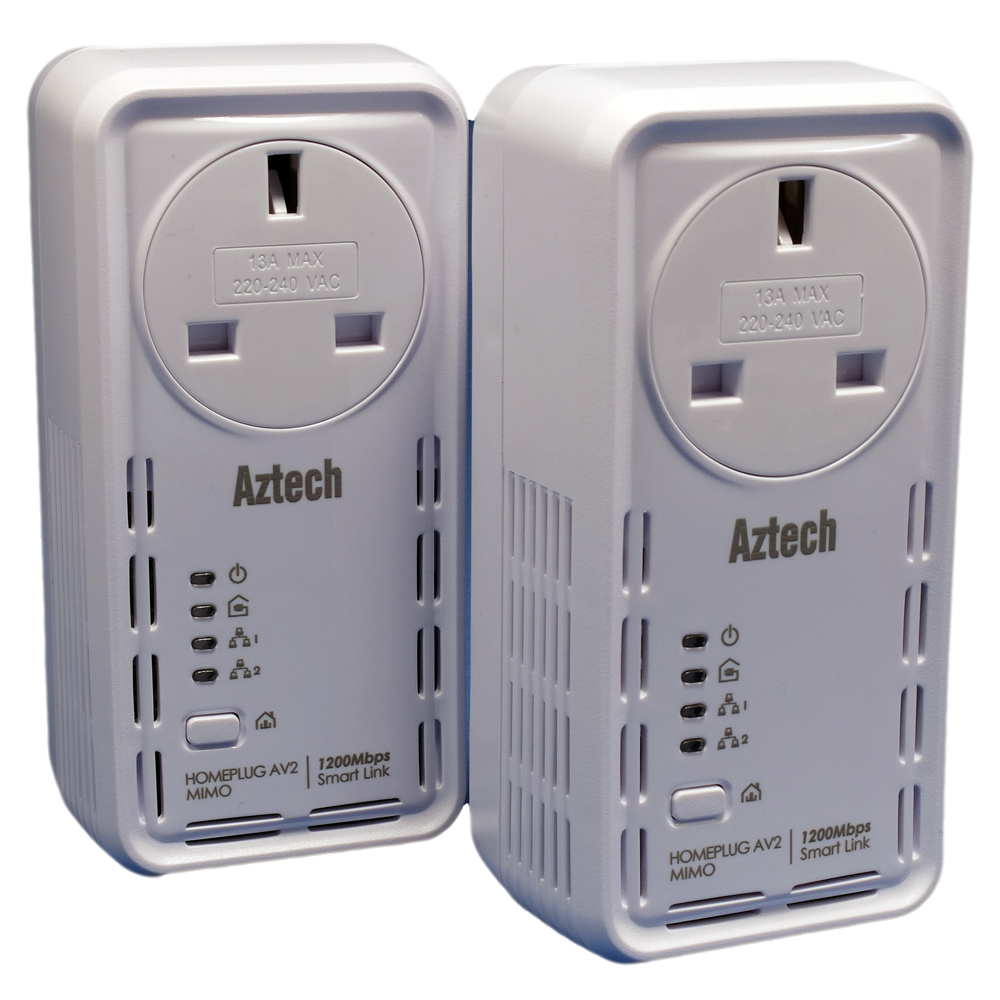 A Homeplug or Powerline Adapters are used to create a wired network using the existing electrical circuit in your home by using small radio waves to communicate with other Homeplugs on the network. You connect one Homeplug adapter to your router via a network cable and other Homeplugs are placed around your home providing a network connection point without running any wires.
There is no set-up required to create the Homeplug connection, they create the Homeplug connection straight out of the box. For WiFi Homeplugs you will need to set-up the wireless security settings. If you have an existing Homeplug network you can use other manufacturers’ Homeplug adapters if they are using the AV or AV2 standards.
For best performance, a Homeplug should be plugged directly into the mains socket. Homeplugs are influenced by electrical noise generated when power supplies are plugged into the mains; many power supplies for mobile phones, routers, smart devices and tablets create noise on the mains and may cause interference to your Homeplug network. A good solution to this is to use a Homeplug with mains filter socket (Piggy device) and plug all nearby devices onto a power strip adapter which in turn is plugged that into the Homeplug’s mains filter socket – this means the Homeplug network will then be shielded from the electrical noise.
Homeplug offers a great solution for providing network connectivity in a building using existing wiring and without installing any new cabling.
Solwise offers three types of Homeplugs - Ethernet (wired), Wi-Fi, and PoE (Power over Ethernet). For reference, Solwise 200AV, 500AV, and 1200AV2 Homeplugs are all backwards compatible.