WiFi at the Lawns Caravan Show 2014

The Hull and East Riding of Yorkshire Caravan Manufacturers' Association runs The Lawns Caravan Show every September, to introduce the new season's caravans.  The Lawns Show in Cottingham, near Hull, generally features more than 130 new touring caravans and about 150 caravan holiday-homes, lodges and park homes from most of the major British manufacturers. Following the Extravaganza there is a trade only event. The show attracts about 3,500 visitors from throughout the UK, and many parts of Europe and Scandinavia – and sometimes even further afield.

This year, local company, PA Business Ltd had the task of providing wireless coverage to all the exhibitors at the show. Whilst it was useful for the holiday home exhibitors to have good coverage over the retail weekend it was paramount that they had good coverage over the trade section of the show because it was at this point they needed to get orders back to their HQ’s.  Obviously it was the other way round for the caravan and accessory dealers that sell directly to the public.  They will have required access to credit services and finance companies to ensure getting the best deal for their retail customers. With this in mind PA Business Ltd had to put in enough Wireless Access points to cover the whole site, stable enough to cope with the demand and reliable enough to give a consistent internet connection to all.
John Wigglesworth, Sales Director, of Carnaby Caravans commented to Louise Barrett of Solwise ‘…it was crucial the WiFi worked well on the trade days to allow us to send orders directly back to the office. The system in place worked brilliantly.’ 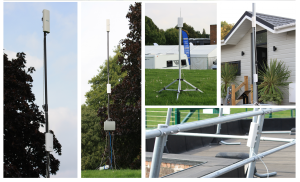 In total there were 25 networked EnGenius WiFi points. These consist of NET-EL-ENH500 and EL-ENS200EXT.  They are powered by generators that are switched off overnight and powered back up each morning.  The units were mounted on portable poles around the site allowing them to be easily moved to achieve the best coverage. Some units were mounted at the top of small hills with the cables being laid underground to avoid unsightly views. The ENH500 units were used to provide a 5GHz backbone and the ENS200’s provided 2.4GHz client access.

Kevin Allitt of PA Business Ltd commented ‘the weekend has surpassed all expectations. We are all very pleased. ‘

Kevin, of PA Business Ltd, wrote a program which site mapped The Lawns showing where masts are working and where they are switched off.

The image below shows the masts in-situ and not switched on.

Masts in-situ and not switched on

The image below shows the masts working, if the masts fail they also turn red and send an email to Kevin’s  mobile phone telling him which mast has failed in order that he can investigate without having to return back to the office.

Masts in place and working

If it was a glitch and the mast starts to respond it will send a further email to inform him that the one which had previously failed is back online again.

EZ Controller covers the ENH, ENS, EAP and ECB range of products and is available for Windows, MAC and Linux platforms. The user-interface is divided into four different panels that you can switch between, Map, Stats, Device and User.

The MAP panel is to display the live status of the managed network graphically. The units are plotted on the map. All new located devices will be added to the Unplaced APs columns and you can then drag them to the map.

The STATS panel is to monitor the statistics of each managed node.  You can view the record of the upload or download data bytes of the node by using the available options.

The DEVICE list, lists the discovered node units with their current data. You can reboot or upgrade firmware of a selected unit at this panel.

The USER list tabulates information about clients that are currently connected to the nodes.