802.11ac was introduced to handle the boom in devices that need to use a wireless network at faster speeds. Whereas we would still argue that you can't beat a lan cable for the fastest and most reliable network connections, you can't get away from the fact that the vast majority of users prefer the mobility that a wireless network offers; this is especially true where the client device is a phone or tablet.

802.11ac is the next evolution in wireless technology, going forward from 11n which has been around since 2009. 11ac wireless technology represents a significant performance increase over its highly successful predecessor, 802.11n. The 802.11ac IEEE standard allows for theoretical speeds up to 6.9 Gbps in the 5-GHz band, or 11.5 times those of 802.11n. The first draft 802.11ac was ratified in Jan 2014 (referred to as Wave 1) with PHY* rate speeds up to 1.3Gbps. Wave 2 is the second release of 11ac products which is hitting the streets in late 2016 and promises some new, exciting features with PHY* rate speeds up to 3.47Gbs (well in some countries anyway!). However the full IEEE specification for 11ac actually allows a PHY rate up to 6.9Gbps; assuming, of course, that there's the frequency bandwidth to support such things!

11ac Wave 1 products use 20, 40 and 80 MHz channels in the 5GHz channel space and is backward compatible with 11n (and hence 11a). The move to 5GHz was necessitated by the much wider channels used by 11ac – the good old 2.4GHz band simply doesn't have the bandwidth to cope. 11ac uses 433Mbps spatial streams (c.f. 11n which uses 150Mbps streams) and supports up to 3 spacial streams giving a maximum, theoretical PHY rate of c. 1.3Gbps (maximum MAC throughput of approximately 845Mbps). Obviously, just like 11n, with Wi-Fi being shared, speed and performance is directly related to the number of people sharing a network and the amount of available spectrum i.e. the amount of interference from neighbouring Wi-Fi networks.

The 256 QAM* that is supported by ac Access Point Wave 1 products has the benefit of increasing performance by about 30% but is only very useful in high-quality, low-interference settings, as with devices located in the same room. This makes it less applicable in the real world business.

Wave 1 Access Point's are similar to 11n Access Point's which both support 3 spatial streams. This is done using a 3x3 SU-MIMO (single-user MIMO), that only allows an Access Point's base station to transmit to one client at a time on a channel.

The second release of 11ac products, so called Wave 2 products, allow the use of 160MHz wide channels or 80+80 bonded channels. Moving up to 160-MHz is good for bandwidth so, theoretically, this means more users can be supported with better performance. However, given that 160 MHz of relatively unused contiguous spectrum is impossible in the EU 5GHz band, 11ac products in the EU will continue to use 80MHz frequency segments, enabling them to be placed more flexibly but will limit maximum performance. However Wave 2 products can use up to 4 spacial streams (Wave 1 is only three) which allows a further performance gain.

One of the biggest upgrades in Wave 2 products is related to MU-MIMO. This is the multi-user version of MIMO technology that allows a base station to transmit to multiple users (up to 4) at a time giving several clients simultaneous access to a channel. This means Access Point's can transmit to 4 single-stream devices such as 4 smart-phones at once. The multi-user format is meant to boost user capacity. The MU-MIMO must be supported by both the Access Point and the client to be used since it relies on interoperable beam-forming. Some Wave 1 products that use SU-MIMO have integrated beam-forming to improve the performance.

Beam-forming is the ability of the 11ac to create 'signal beams'. Instead of issuing signal equally in all directions, this type of Wi-Fi recognizes the position of the devices and intensifies the signal in those directions. 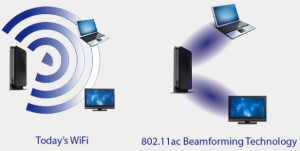 Beam-forming or spatial filtering is a signal processing technique used in sensor arrays for directional signal transmission or reception. This is achieved by combining elements in a phased array in such a way that signals at particular angles experience constructive interference while others experience destructive interference. Transmit beam-forming is an option in Wave 1 and explicit in Wave 2. The improvement compared with omnidirectional transmission is known as the directivity of the element. Aiming the signal using beam-forming gives a significant improvement over a standard omni antenna set-up and significantly helps where there are multipath issues i.e. non-line of sight.

MU-MIMO stands for multi-user multiple input, multiple output, and is a brand new feature introduced with 802.11ac Wave 2. Note that Wave 2 MU-MIMO support is required on both the access point and client device to work. It only operates in the downstream direction, access point to client, and allows an access point to transmit to multiple client devices simultaneously.

This differs from Wave 1 and previous single-user (SU)-MIMO 802.11 iterations, in which an access point transmits to a single client device at a time very quickly and efficiently: 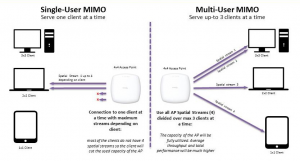 So Mu-MiMo allows the client capability of the Access Point to significantly increase. The ability to massively increase the numbers of clients an Access Point can handle as well as the ability to simultaneously talk with several clients is one of the major improvements Wave 2 offers of Wave 1 (or the older 11n type technology). However it's worth noting that only Access Points or clients with the correct Wave 2 11ac hardware will be able to use Mu-MiMo.

So will your 11n client device (phone, tablet, whatever) support 11ac?

The simple answer is No! 802.11ac Wave 1 requires new hardware in both the access points and client devices to deliver channel widths up to 80 MHz, 256 quadrature amplitude modulation (256-QAM), and up to three spatial streams. So you cannot simply upgrade using firmware your 11n hardware to give you Wave 1 11ac. Similarly, Wave 2, a superset of Wave 1, requires new hardware in both access points and client devices above Wave 1 to support the additional 802.11ac capabilities such as MU-MIMO, and four spatial streams. So even if your current product supports 11ac Wave 1 that does NOT infer that it will be able to do Wave 2. As of writing this article even the new iPhone 7, which does support 11ac Wave 1, doesn't have the correct hardware for Wave 2 operation.

Refers to the basic wifi, published transfer speed and it's what is reported as the wifi connected link speed. For example you might have 11ac wifi showing a wifi connection speed of 866Mbps. Typically the actual throughput speed (i.e. how fast bytes of data are sent from point to point) is half the PHY rate. This is because the PHY data rate includes extra information sent along with the data e.g. packet headers and footers. When you strip this extra information and take off delays due to packet acknowledgements then you are left with a true throughput speed. So a wifi connection speed (PHY rate) of 866Mbps will typically have a true throughput of c. 400Mbps.

Basically refers to how the data signals are overlaid onto the raw wireless waveform. In practise each wireless signal is sent as two radio waves overlaid onto each other (actually 90 degrees out of phase but you don't need to know that). Each of the two waveforms is modulated (that means the amplitude - strength - of the signal is changed to represent the data value) and then the two signals are added to give the actual data value. 256-QAM means there are 256 possible signal combinations overlaid onto the wireless wave form derived by varying each wave in 8 different ways (if you want to know the maths it's 2 raised to the power of 8 giving 256). When you do the maths, varying 2 waves 8 different ways means there are 256 possible values derived by adding the two separate values together. What this means in practise is you can send  8 times the amount of data over the original wireless waveform.