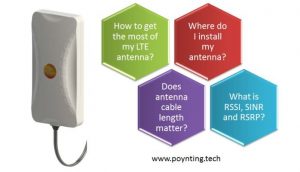 I recently had the following questions from a customer and thought it might be useful for other people installing a LTE or 3G antenna  at your house or office for fixed broadband.

“I hope you can assist me. I have an XPOL-006 antenna that I need to install.  From the specifications on the website I see the band, dbi as well as that it is directional. I am about 300m from my nearest cell tower with a high rise building in the middle.”

Can you help with the following questions:

Q1: How do I get the most of the antenna?

A1: Orientation and position most important –more below

Q2: If I increased the length of the cable would that affect anything?

A2: When you increase the cable length you reduce the signal (due to losses in the cable). Given your proximity to the tower I think you will have minimal impact if you use max 10m additional cable (assume you have one which already has a cable). If the additional cable allows you to have a more suitable mounting position.

Q3: Is there software that I can use besides the LTE modem to test the strength of the signal?

A3: The modem really is the easiest option. There are software available on smartphones (OpenSignal and others). The phones don’t have connectors for the antenna but sometimes it is useful to see if a location (position on roof etc) does already deliver better signal than say the other side of house/building. Just be patient with the modem signal strength readings – they often take 10 sec or more to update readings so don’t change the position of the antenna too fast. To get a sense of the modem response look at the signal when the antennas are disconnected and then just see how fast it responds when connecting the antenna. You will see that there are quite delay between disconnecting the antenna and see the display on the modem changing.

Q4: Is higher better when mounting an antenna on a pole?

A4: When you are far away from a mobile base station the height definitely makes a difference. In your case when you are close to the base station, but have no line of sight (due to obstructing building) it will be irrelevant. It is much more important to find the optimal position – you could that it is low rather than high.

Q5: Would angling the antenna up make a difference?

My mounting advice given your situation (close station with building in between):

Use the modem or simply your cellphone (with an app or at least using same LTE network) and test “general” signal strength at possible mounting positions. Choose 4 or 5 places – don’t omit ones which “seem” wrong like opposite side of building from base station. If possible test one “highest” position with least the obstructions in any direction from your own building. This will likely be the best place but not necessarily.

The above is laborious but useful if you really want “the best”. Just mounting it on building closest to the base station outdoors (any height) and trying 4 angles in 180 degree sector towards base station will work most of the time if you don’t feel like lots of effort. Even less is purely position antenna front facing base station without any testing and then see how it works – if it works well enough mount like that otherwise spend effort above.

Q6: Last questing about MIMO, which one of the below would tell me if I am at my optimal MIMO position?

A6: Pls see the image below, but in short the RSRP/RSRQ are the relevant ones for LTE performance. If SINR (same as SNR or S/R) is available it is the easiest to use for alignment. Use the table below as indication. If SNR is, say 13 dB but RSRP is below -80 or RSRQ is below -10 it indicates a problem but if they are in same range as table then easiest to use SNR only.

The RSSI is not that relevant for LTE, but could be calculated as below:

RSSI – Represents the entire received power including the wanted power from the serving cell as well as all cochannel power and other sources of noise and it is related to the above parameters through the following formula:

Where N is the number of Resource Blocks of the E-UTRA carrier RSSI measurement bandwidth.

Generally up to 20 times speed increases are possible  between bottom and top when combining increased signal with decorrelated MIMO antennas. Signal strength only increase with single antenna or two antennas without much decorrelation can give about 10 times speed improvement.

Signal Strength – GSM & 3G/HSPA (RSSI) Applicable to GSM and 3G networks. The exact signal strength, often called Received Signal Strength Indication (RSSI), is measured in dBm. The dBm scale is roughly between -50 and -120dBm, with -50 being perfect signal and -120 being when you fall off the network. RSSI measures both the usable signal and the noise in a single figure.