What is Homeplug over Twisted Pair?

Traditional Homeplug is a method of transmitting network data down standard mains powered cables. So the network data is overlaid onto the mains signals. Typical applications are networking around the home via the mains sockets. This is the application of Homeplug that 99% of people are familiar with. However, it is also possible to send Homeplug signals down other cable types; the Homeplug technology is flexible and independent of the cable type or the infrastructure used for the transport of the signals – you just need to make sure that the product has the necessary hardware interface specific to the type of cabling or transport infrastructure you want to use the units on. So with the correct hardware interface on the Homeplug units you could, for example, use Homeplug networking down coaxial cable or standard twisted pair wire. The advantages of Homeplug over more dedicated cabling, compared to over active mains cables, are much higher data transmission rates and longer cable runs. The electrical noise invariably present on normal mains wiring and the complications present in how the cable is distributed (spurs, consumer units etc) often limits the effective data speed and also restricts the length of cable runs you can get away with. Homeplug over, for example, twisted pair wire can give TCP data throughputs in excess of 25Mbps with cable runs of 500m.

Read the rest of this introduction below

This range is no longer available 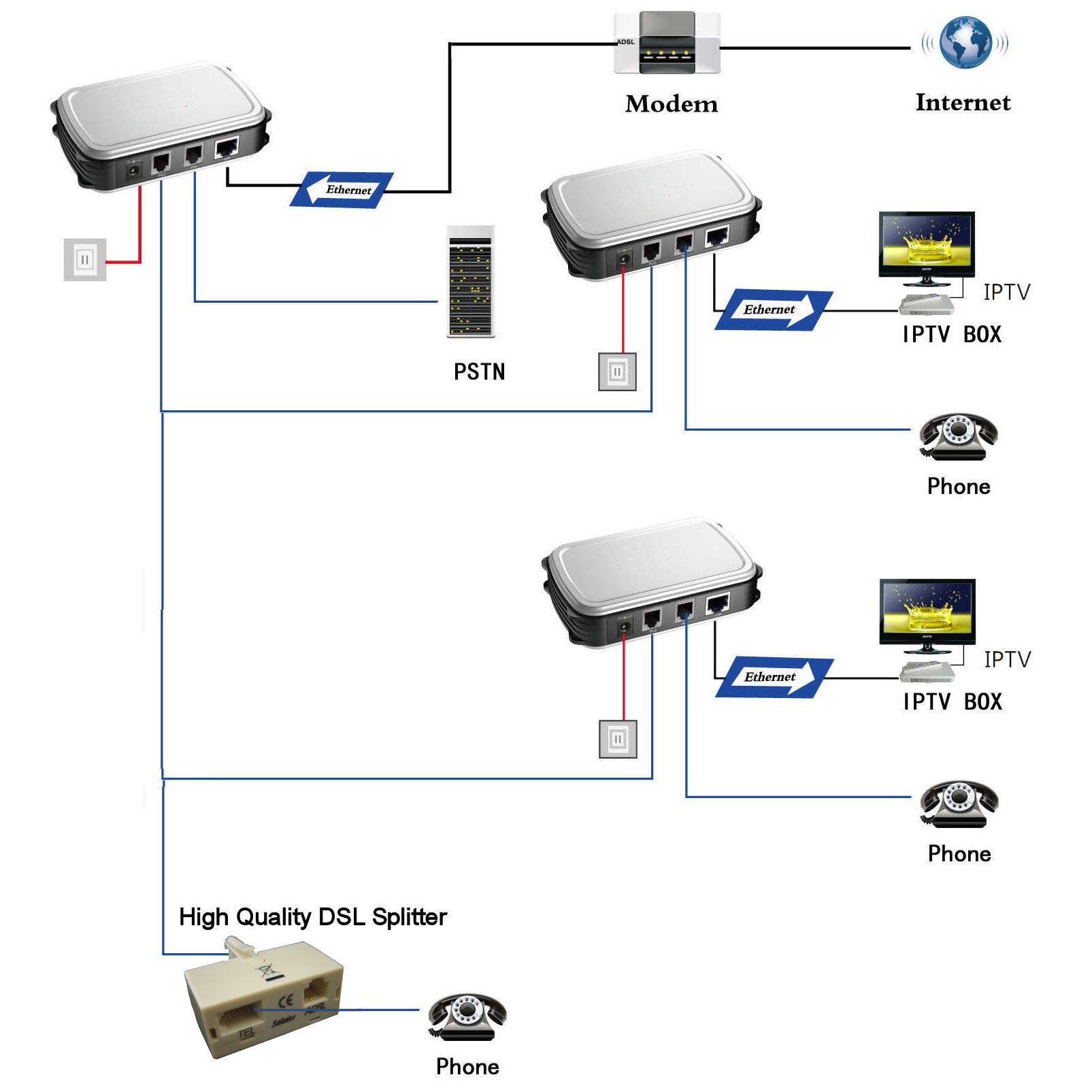 Above illustrates a typical wiring layout. In this example the twisted pair wire used is an active telephone wire which has three extensions running from the same PSTN (phone) line. In this example (this might be distributing the internet to several rooms in a large house) the first Twisted Pair Homeplug unit takes a network cable from the internet source modem/router. In this example this happens to be at the same point where the main telephone line comes in (as it often will be where the broadband is coming as ADSL over the main phone line) so the telephone line connects to the TEL port on the Twisted Pair unit (if this IS a phone line which carries ADSL then you need to ensure that the phone line connection is made through a DSL splitter). Then the wiring to each telephone extension connects via the PLC port on the Homeplug device. At each extension, to convert back to a network and phone connection you connect the active telephone wire to the PLC port. The telephone at the extension connects to the TELK port and the network connection to the LAN port.
If you have an extension where you want to connect a phone to the active line but don't need a network connection (so the expense of installing a Twisted Pair Homeplug unit would be a waste) then a quality DSL splitter (note the word 'quality') can be used to isolate off the telephone signals from the extension wire (as illustrated above).