All wireless signals suffer from an effect called Multi-path effects. These can be explained as coherent signals (signals from the same source) arriving at the antenna at different times due to the difference in path length. Several signals from the same source meeting at the receiving antenna can arrive in phase, out of phase or in between depending upon whether the signals have come direct or by reflection.

When the level of each incoming signal is included, the effects can be any of the following:

The conductivity of the reflector and polarisation of the wave before reflection primarily affect the level of the signal. Horizontal polarised signals, which are parallel to the reflecting surface, will reflect almost totally without appreciable loss at the point of bounce.

Vertically polarised signals are perpendicular to the reflecting surface, and will either be totally reflected from a conductor, or will propagate along the surface (depending on the angle of the arriving energy). Since radiated waves penetrate lossy materials, energy can be lost to heat generation.

The velocity of RF energy is delayed with prolonged passage through dielectric materials that are denser than dry air. This is refraction, or the change of direction of propagation. The time spent in the denser material controls the degree of refraction and the resulting direction of the emerging wave.

Perfect shadows that are cast by RF-opaque structures or objects are rare at wireless system frequencies. Because of diffraction, energy scatters at the edges of the obstruction. Diffraction is more pronounced in sharp or knife edged corners. According to field theory, edges cause secondary radiation when illuminated. This is generally independent of polarisation when the scattered is much longer than the impinging signal's wavelength.

Diffraction forms a fuzzy signal source at the edges, which tends to fill in the shadowed regions. The signal levels are low but often usable. These edges can be corners of a building, window frames or large vehicles. Diffraction also figures significantly in scattering at hilltops lying in the propagation path.

Free space radiation patterns are the baseline performance criteria before installation in the real world environment. Since sites are located on rooftops, or on the side of buildings; many opportunities exist for interference from chimneys, walls, masts, towers and other antennas. Although it is difficult to predict level changes you can take steps to minimise pattern distortion.Obstructions are either conducting or non-conducting. Conducting objects create the most severe disturbances. Those near the resonant length of the antennas, such as other antennas, behave as the parasitic elements of an uncontrolled array, producing random nulls and lobes. Larger conducting structures causes severe shadowing. The closer the spacing, the larger the shadow.

Spreading is the principal contributor to signal loss for line of sight propagation. As a signal radiates it spreads or expands into a spherical surface. The available RF power is distributed over this surface and weakens with increasing range. The signal is reduced by 6 dB for every doubling distance from the source. We compute the loss path between the source radiators with spherical patterns using the following equation:

This is not 100% true. Sometimes a signal will go from point to point by a route which is by reflection (e.g. from a neighboring building). In fact reflection is generally the only way to make a wireless link when you don't have clear line of sight. It's also worth noting that 5GHz radio reflects a lot better than 2.4GHz and is generally a much better method for NLOS (non-line-of-sight) connectivity.

It is therefore necessary to know the requirements of a clear path (known as 'line of sight').

Line of Sight (LOS) means a bit more than the words say. Of course the first condition for a LOS link is that the two antennas can be connected with an imaginary straight string. There should never be any object blocking this line. Achieving this with a short link is fairly easy. Long links, however, can cause problems. As well as binoculars and a compass, a large calibrated tether balloon can be used for determining line of site. Letting this balloon up on one side until it is visible from the other side will tell you exactly the required height for this link. Repeat this both sides.

Besides the LOS there is the Fresnel zone. This zone is an elliptical area immediately surrounding the visual path. It varies in thickness depending on the length of the signal path and the frequency of the signal. The necessary clearance for the Fresnel zone can be calculated, and must be taken into account when determining the height of the antennas. 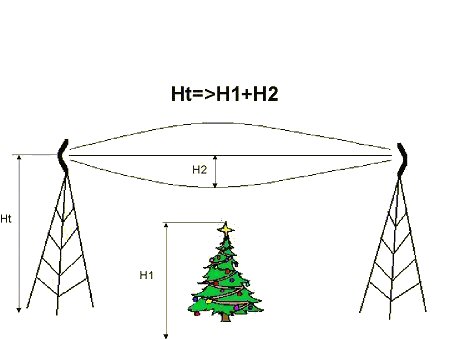 A rule of thumb for the clearance needed above and below the signal path (H2) is, for 2.4GHz operation, for every 1.5 km a clearance of 4 meters is necessary. At 5GHz the required clearance is about have this (see our 5GHz technical article for more details on this and other 5GHz factors). A result of this rule is that large distances need great heights.

Think about the following things if you have to determine the line of site:

- Trees grow leaves
- Make sure you have enough height

The link budget calculation is as follows:

We want to bridge a point-to-point distance of 6 Km over average terrain in a dry climate using 11b wireless. The bridge must perform at full speed (e.g.11Mbps).

To be able to do this, we first select the components we need. Let's assume that you will use 'standard' access power devices (c.100mW, 20dbm) and 14dbi gain Yagi antenna at each end.

So we have a margin of about 6db on the link. This is a good margin giving you plenty of excess to cope with unforeseen losses for example due to rain! Generally, we would not advise trying a link with a margin lower than about 5db.

We want to bridge a point-to-point distance of 6 Km over average terrain in a dry climate using 11a wireless.

So we have a margin of about 4db on the link which is acceptable for a wireless link at 5GHz. Generally, we would not advise trying a link with a margin lower than this.

Now, let's do the same example again but this time at the full, 54Mbps speed:

Again, we'll assume that you will use 'standard' 11a (Band B) access power devices but most 11a devices have reduced power at the higher speeds. Typically the power output at 54Mbps will be about 17dbm. To cope with both the reduced power output and also much lower signal sensitivity then we shall opt for 23db gain Panel antenna at each end.

So we have a margin of less than 4db on the link. This is at the absolute limit of margin for a wireless link at 5GHz. Generally, we would not advise trying a link with a little higher margin than this. You might want to consider running at a slightly lower speed (to improve the signal sensitivity) so as to give a more stable link.

Using the link budget calculation from above we can derive a quick and easy ready reckoner table for antenna gains vs. distances. Below shows 'typical' transmission distances assuming the same gain antenna at both ends and antenna cable losses no worse than 3db at each end (for example this would be about 5m of HDF200 with connectors at 2.4GHz or about the same length of HDF400 at 5GHz). It assumes 20db output power and signal sensitivity of -83db at 11Mbps operation for 2.4GHz. At 5GHz it assumes 20db output power and -83db at 11Mbps. At 54Mbps we shall assume 17db power and only -65db sensitivity.

You might need to make allowances if your setup or equipment specs. differ from this however these figures can be used as a rough guide. Of course it is also assumes you have clear line of site between points :-)

Please note these figures should not be taken as 'gospel': We give no guarantees that a link will work even if the link budget says it will!

Mechanical installation of the antenna

A solid mechanical installation of the antenna is the base of a quality link. An outdoor mounted antenna is exposed to extreme weather conditions. Metal brackets oxidise, and vibrations will cause slack on connections. Therefore, the mechanical connection between the antenna and its carrier needs to be solid. Use locktite on screws. The connector between the cable and the antenna needs to be sealed with threading tape. Corrosion on the connector will cause signal losses due to changing impedance of the connection.

Outside mounted antennas are lightning-strike sensitive. Lightning strikes always are common at highest and smallest point, typically an antenna. The antenna cable will then conduct the enormous amount of energy towards the equipment. If no lightning arrestor is placed in-between the antenna cable the bridge unit will be damaged, or worse, set on fire. Therefore, always use a lightning arrestor.

When placing the antennas the following points should be kept in mind:
· With an outdoor installation of the antenna always use a lightning arrestor
· Make sure that the mounting of the antenna can handle high forces. Wind can cause misalignment or even permanent damage
· Keep the cable length between the antenna and the bridge limited to the minimum. Every meter of cable causes signal loss

Lightning strikes can cause major damage on equipment and buildings. An antenna placed on a roof is often the place of strike. Dish antennas mounted against a wall are less risky. The cable conducts the lightning into the building. Due to this behavior an antenna installation requires dual protection. The antenna needs to be grounded, and the cable requires a surge protector.

Below are some general hints on lightning protection:

Never mount an antenna though the roof, only on the roof
Keep the antenna cable as much as possible out doors
The cable shield needs to be grounded on the highest possible point, and at the point of entering the building.
Place a surge protector on the antenna connection at the bridge, and also on the power supply of the wireless device.