Fibre optic communication is a method of transmitting data between locations using pulses of infrared light through an optical fibre cable. The light itself in this technology is a form of carrier wave that has been modulated to carry information. When compared to electrical cabling, such as Ethernet or network cable, fibre supports much longer distances (Ethernet cabling is typically limited to 100m), higher bandwidth capacities (10GB over 10km), and has immunity to electrical interference.

Fibre communication itself supports voice, video, and telemetry data: all the same kinds of network traffic you would have with a standard Ethernet cable, just with the potential for carrying it in higher capacities across longer distances.

Fibre cable typically comes in two versions: single-mode or multi-mode. Single-mode fibre’s core is smaller than multi-mode’s and has a varying refractive index across its diameter, allowing it to guide the light directly down the centre of the fibre cable. This means that the light reflection created during transmission decreases and subsequently lowers attenuation.

Multi-mode on the other hand has a much wider fibre core, up to six times larger than single-mode, and it constrains the light within the fibre using total-internal-reflection, resulting in many paths for the light pulses of different lengths. A short light pulse will therefore typically spread itself out over the length of the connection. This is known as having multiple modes.

Since multi-mode has multiple light paths travelling down the fibre cable, it suffers from modal dispersion and consequently can’t transmit at fast data rates for long distances. At the fastest data rates it tapers off at about 120m and even at slower data-rates multi-mode fibre has a maximum distance of 1000m.

In comparison to multi-mode, single-mode fibre sends all light from a pulse at the same speed, meaning the light arrives at practically the same time, eliminating the effects of the modal dispersion and removing distance as a negating factor for high-capacity data rates.

This results in single-mode fibre having essentially no limiting factors to its practical length apart from the clarity of the glass itself, leaving it with a maximum distance of 10km regardless of capacity.

Ultimately, you should always be looking to use singlemode fibre over multimode. Subject to the availability of its termination technology (i.e. fusing or ‘fast’ gel connectors), single-mode is the obvious choice for new fibre installations.

Fibre cabling is terminated using optical connectors in order to connect network devices together; two of the most common connector options available are SC & LC.  SC (Subscriber Connector) was developed in Japan by Nippon Telegraph and Telephone (NTT) in the 1980s and was one of the first fibre 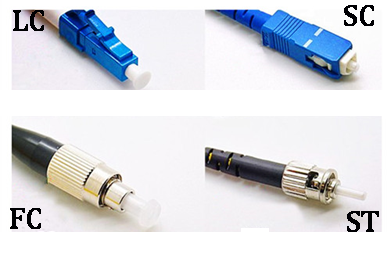 connectors to hit the market.  They were originally intended to be used with Gigabit Ethernet networks but were later standardised into telecommunication use as the manufacturing costs fell.  Nowadays, SC connectors are primarily used for single-mode data and telecom applications, including point to point and passive fibre optic networking. They are sometimes referred to as the "square connector" because of the physical appearance of their push-pull coupling end face with a spring-loaded ceramic ferrule.

The main alternative to SC is LC, a connector type which was largely considered to be the successor of SC upon its release. Initial adoption was slow due to Lucent Corporation, the company that developed them, charging high licence fees for their use, but over time they’ve become more affordable and, consequently, more commonplace.

LC utilises a clip-in connector with a latch, differing from SC which uses a locking tab. LC is classed as a small form factor connector and therefore has a smaller ferrule. LC connectors have half the footprint of SC connectors, making them the preferred option in densely populated racks or panels that are commonplace in datacom systems such as SFP transceivers.

There are also other less-common connector types, such as FC and ST, that aren’t necessarily worth using but are good to be aware of.

FC (Ferrule Connector) is a round, threaded connector type developed by NTT (like the SC connector) that used to be common in single-mode fibre installations. However, it’s dropped in popularity over time due to problems relating to its vibration loosening in which the connections become unstable.

ST (Straight Tip) connectors were developed in America by AT&T shortly after the advent of the FC connector, to which they are similar in appearance. The key difference however is that the ST connector uses a spring-loaded bayonet mount rather than FC’s screw thread. ST connectors are used mainly in multi-mode fibre cabling.

Ultimately, the future of fibre is with LC due to how much they excel in busy network environments. With the continuing development of LC-compatible transceivers and active network components, SC will join multi-mode fibre in becoming more and more antiquated as the technology progresses.

If you are considering running and terminating fibre cables, we suggest you go the logical route and use single-mode fibre for your cabling with LC for your connectors. The price differences aren’t significant enough to justify using weaker technology like SC connectors and multi-mode cabling, so you should only really be looking at these as options if you’re finding that LC and single-mode technology is limited in availability.